Up until very recently my husband, Brian has been sidelined from the golf course because of an injury sustained in a fall this past winter. My mom used to say, " it's an ill wind that blows no good", and this unfortunate state of affairs has allowed us to spend time together exploring the southwestern Ontario countryside, sometimes going in new directions on previously unknown backroads and sometimes revisiting favourite places and occasionally getting temporarily lost. We've become the Gallivanting Garringtons! It's been great fun for us both and inspirational for me.

When not gallivanting with Brian I've been in my studio and it has been a productive time. I've completed a few large floral paintings and have headed off in a new direction, painting small 20 x 20 cm still life tablescapes. 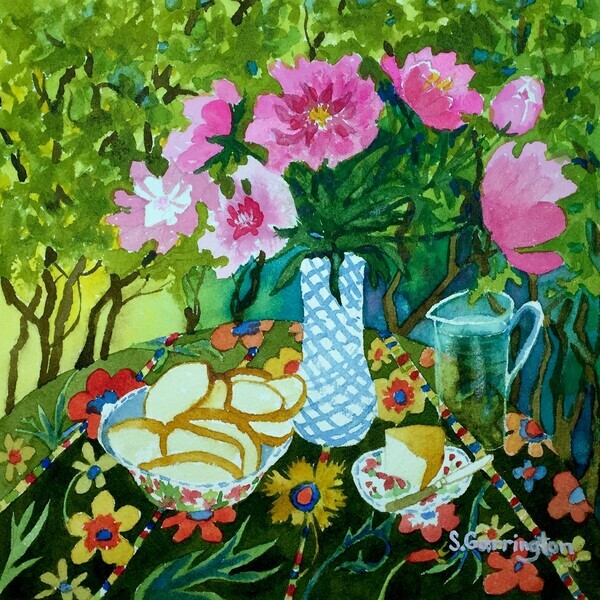 As I have worked and played the studio has become progressively less and less organized, less and less tidy. Even the resident art critic and studio assistant, Merlin, is reluctant to join me there. When I look around I remember a quote I read somewhere, " One of the advantages of being disorganized is that one is always having surprising discoveries". So far all I have discovered is that I apparently thrive in chaos, at least for a while.

One of the nicest surprising discoveries to happen this summer was a message I received from a purchaser of one of the paintings at Art and Soul in Port Stanley who was thrilled with her purchase and wrote to tell me that it was her first piece of original art and that she would be hanging it in her new apartment soon. Delightful!

I am looking forward to taking a print making course this fall, and am excited by the prospect of experimenting with both a new direction and a new medium.

I hope that you are enjoying these last days of summer and have had the opportunity to explore some new directions yourself or to make some surprising discoveries.